Consideration of the Catholic, bilingual and tri-cultural nature of the University is an important aspect in the choice of candidates. The following guidelines apply:

While the Committee is responsible for finding the best possible candidates in a given year and for ensuring a balance across various disciplines and groups over a period of time, the following categories are emphasized:

The committee determines its own procedures which at a minimum will be as follows:

The President shall determine the ceremony at which the degree shall be awarded in accordance with the availability and wishes of the honorands.  The names of nominees shall remain confidential until such time as their acceptance of the offer of a degree is announced by the President.  Only the President will communicate with the recipients.

Nominations should contain a short (maximum 250-word) citation that could be used at an award ceremony and a description of no more than two pages of the candidate's accomplishments and the basis for their nomination.  The candidates should not be made aware of their nomination or solicited for information.  Letters of reference should not be sought. Confidentiality is critical to avoid hurt feelings and embarrassment as the University typically receives many worthy nominations and can only award a limited number of honorary degrees. 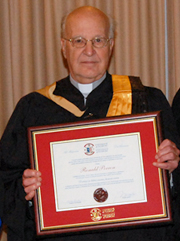 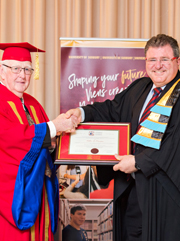 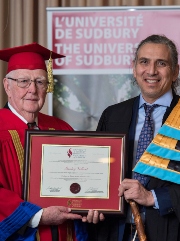